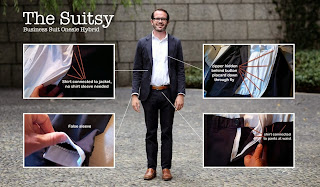 Last Thursday, Jesse Herzog unveiled the Suitsy on Betabrand.com, the online clothing company that lets the Web decide the future of fashion.

Ever since, the site's raged with debate -- Is the Suitsy the end of Western Civilization or it's savior?!

According to Herzog, "Imagine looking professional, but feeling like you're in pajamas."

The Suitsy is a jacket connected to a shirt connected to pants. A zipper is hidden behind the shirt-button placard (with false buttons) and pants zipper. Fake shirt-cuff material extends from the end of the jacket sleeves to give the impression of a complete dress shirts worn underneath. It's as if a jumpsuit and business suit had a love child.

Mr. Herzog is a real estate developer by trade, but is able to dabble as a fashion designer in Betabrand's Think Tank.
business clothing fashion startup