Showing posts from June, 2018
Show all

Forum - Share Presentations Directly on Any Device Without the Internet

Forum from Fasetto on Vimeo . With innovative features in its hardware and software, Forum provides convenience and ease-of-use across many functions of presenting, making it an optimal business tool for the sales executive, road-warrior, or anyone giving an in-person presentation. Forum features a dual-band, Wi-Fi capability.  It creates its own local, private Wi-Fi signal—eliminating the need for wires or dongles—while simultaneously connecting to the internet, when available. The Forum hub easily travels.  The device is ultra-compact and fits into your jeans 5th pocket. Setup is also effortless—all the presenter has to do is turn Forum on and participants connect to the self-generated Wi-Fi signal and then enter a unique URL (meeting.Forum).  That’s it.  No extra steps. Nothing to download.
Post a Comment
Read more

Cat Explorer - A new #VR to see the inside of your Cat.

Thousands of years after civilization was destroyed by a cataclysmic event, humankind has adapted and a new way of living has evolved.  Gigantic moving cities now roam the Earth, ruthlessly preying upon smaller traction towns.  Tom Natsworthy (Robert Sheehan)—who hails from a Lower Tier of the great traction city of London—finds himself fighting for his own survival after he encounters the dangerous fugitive Hester Shaw (Hera Hilmar).  Two opposites, whose paths should never have crossed, forge an unlikely alliance that is destined to change the course of the future. Mortal Engines is the startling, new epic adventure directed by Oscar®-winning visual-effects artist Christian Rivers (King Kong).  Joining Rivers are The Hobbit and The Lord of the Rings trilogies three-time Academy Award®-winning filmmakers Peter Jackson, Fran Walsh and Philippa Boyens, who have penned the screenplay.  The Universal and MRC adaptation is from the award-winning book series by Philip Reeve, published i
Post a Comment
Read more

Principles for Success: "The Call to Adventure" Ray Dalio

In his new animated series, Principles for Success, Ray Dalio takes you on a thought-provoking adventure to help you understand his principles--and how to create your own. In Episode 1, he discusses how to find your pull in life and figure out how to make your journey go well. Ray Dalio's best-selling book Principles is now an animated ultra mini series adventure. For more updates from Ray: Connect with him on Facebook: https://www.facebook.com/raydalio Follow him on Twitter: https://www.twitter.com/raydalio Follow him on Linkedin: https://www.linkedin.com/raydalio Read his articles on medium: https://www.medium.com/@raydalio
Post a Comment
Read more

Have The Machines Taken Over with Brad Feld - Founders, Venture Capital, ...

Brad Feld of the Foundry Group and Co-Founder of Techstars. Brad is a well known serial entrepreneur, investor, and author of a variety of books from ‘Startup Communities’ to ‘Venture Deals.’.
Post a Comment
Read more

Loom Releases Some Great New Features to It's Video Platform

Your videos get a personal touch, introducing Avatars Camera shy? Or maybe just not in the mood to be on video? We understand.  We build a way to still add a touch of personality to your videos without having to be on camera.  You can now add  an avatar  to your camera bubble and record your "Screen Only" Loom video as always.  What's around the corner for Loom? HD Recording    Open the floodgates for functionality and high quality recording! We're talking 4K recording! We've got one of our largest developments ever coming out soon... our very own  Loom Desktop Application.   Premium Features  We have some exciting premium features coming to you very soon. Make sure to vote for your favourite features on our  Public Roadmap and keep track of what's coming to Loom in the next months
Post a Comment
Read more

Want to Get Your Startup to Korea? 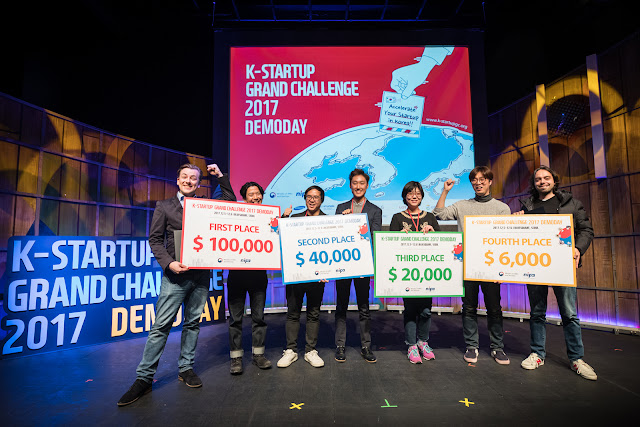 The K-Startup Grand Challenge 2018 Accepting Applications till June 14 Startups get ready to accelerate. Last year, 1,515 firms from 118 countries competed to be selected for the 2017 K-Startup Grand Challenge, a rigorous startup program in Seoul. 49 of them were selected to participate in a 4 month-long acceleration program and received initial funding and office space. The top 25 teams were then chosen in December at a demo day to receive additional funding of 6 months in order to help them successfully claim their place in the Korean ICT industry.
Post a Comment
Read more

2018 WWDC View From the Twitterverse