Kickstarter Unboxed: Pocket Drone is Not Your Dad's RC Copter 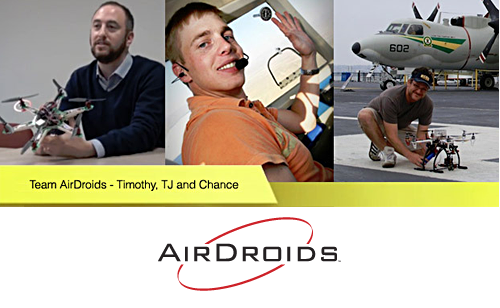 "It's all about helping people access and understand this technology,  so we can allow it to have a positive impact on society"

"(idea for The Pocket Drone) it came out of this user group community, and the range of things that were out there. There are a lot of people working with advanced open source kits that were awesome, but took a long time to learn how to get up and running. And then there were the off-the-shelf products that were limited in their functionality...everything was a pain in the butt to take along with you...how do we make a product that will allow people to access this exciting technology in any easy way and a small form-factor."

"People are displacing a lot of their concerns about public cameras onto drones...A Drone is just a platform to attach the a sensor to"

Affordability in the maker space translates to ease of manufacturing. Thank you open-source community and makers. One could look at the open source community as uncontrolled, unstable but developing your own propriety system can be expensive. Open-source has been around a while. I started in the Forth community as a young engineer and used that kernel in a lot of products sold to the open market.  Open source hardware a win-win--low cost for the consumer and ease of development for the manufacturer.

AirDroids enter the market at an opportune time. Leading electrical engineering educational organization, IEEE, has slated drones as one of the 2014 Top Tech to Watch. At the high end, you have heavyweights like Northrup-Grumman and at the low end you have makers and user groups. But AirDroids hopes The Pocket Drone to be an affordable, small and mass-producible which will make it accessible. With their experience, it looks good for delivery in the summer.

If you have concerns about drones, check out Drone U to keep up on the latest in Drone discussions about privacy and civilian use. You can find more about AirDroids on their Kickstarter page, and follow them on Twitter.