Sony Wants to Play in the Maker Game 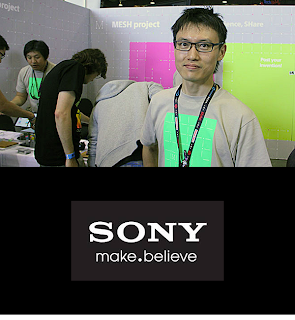 When traveling through the Maker Faire, Sony was the last company I expected to see in the Make:Electronics area of the Expo hall. It was pleasant to see that Sony was trying to embrace the maker movement. We interview Takehiro Hagiwara, MESH Project Leader, on their view of bringing creativity and innovation to the common person. Give it a look.

The promise Sony brings here is not cutting edge innovation but how to develop cutting-edge innovation and creativity in the average person. This is just another extension of the democratization that the Maker movement has created. It was very gutsy for Sony to embark on this project - this says a lot. It is important for Sony and Japan. Japan's system for creating innovators is very controlled where you go through their education system and if you are in the elite of the elite, you may be able to make it into R&D. The IT world has changed that and even in Japan you can find innovators from very modest backgrounds. With MESH, Sony is saying "Anyone can be an innovator." And that is the Maker heart. For more information on MESH, see the following links:

Meet MESH – a creative development platform for the connected life