These Kids Will Kick Your Butt in MS Office


From June 2015 to May 2016, more than 300,000 students entered exams to compete in the MOS U.S. National Championship to demonstrate their level of proficiency in utilizing the world’s foremost desktop computing applications.  During the qualifying round they entered a passing score on an eligible MOS exam and 108 finalists with the best scores and exam times took a unique competition exam in their track at the MOS U.S. National Championship.

Finalists were given a printed copy of a document, spreadsheet or presentation to recreate along with printed instructions and digital assets. They were scored according to the accuracy of the recreation compared to the original. The champions in each program, along with a chaperone, have won a trip to participate in the 2016 MOS World Championship(August 7-10) in Orlando, Florida.

"This year we saw a 25 percent growth in participation in the MOS U.S. National Championship as we encouraged all 50 states to participate in both Fall and Spring qualifiers,” said Aaron Osmond, general manager, Certiport. “Students and teachers all over the country have caught the fire of this competition. They understand that not only is it a lot of fun, it builds resumes and helps these kids hit the ground running in college and in their career.”

Certiport anticipates more than 150 finalists from more than 30 countries at the MOS World Championship (August 7-10) where students will again participate in a unique competition exam in their track. Six winners will receive cash prizes, medals and the title of Microsoft Office Specialist Word, Excel or PowerPoint World Champion. 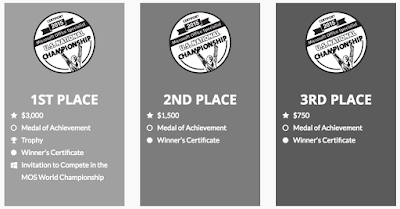 The MOS U.S. Champions are as follows: