In September I was invited to be on the guest list of a very cool event called Thread. I went to the website and saw all these 20 something girls shopping off racks in the photos, I then thought to myself that this was gonna be as cool as going to forever 21 and watching girls shop. But I was forced to go and i'm really glad I did cause those photos did not do this event justice. There were lots of bad ass independent designers from all over the place.

I ended up buying an organic cotton hat from The Organik a couple of super enthusiastic dudes were working the booth. The Organik is from Hawaii and they are very passionate about the eco, green, sustainable lifestyle.

Next up on my highlight list were the san francisco brothers of Artefacture, they were very design heavy, seemed like the type of guys who really really get into font type faces. 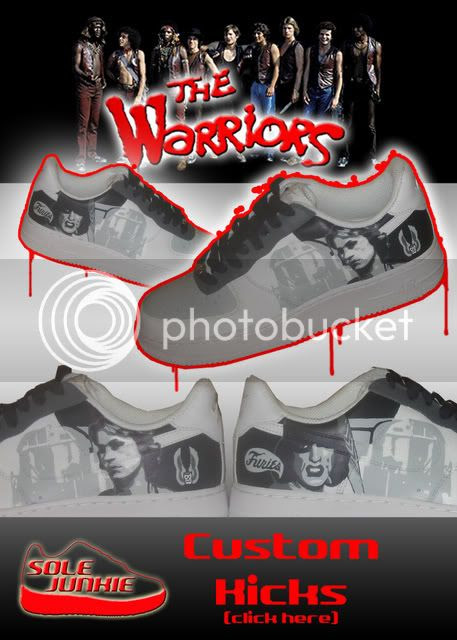 The star of the show had to be the crew from Sole Junkie they custom paint sneakers or rather the very talented bronx boy Steven Cedre Jr. does. My absolute favorite pieces of the show where his "Warriors" sneaker series, it was beyond incredible.

There was some nice san francisco folk there from Girl Rider they should really get into the baby clothes making biz, actually most of these designers should.

There was a guy from Lunch Designs, had a nice variation of tees, hoodies and baby gear. Look for these cats to go off, they have lots of mass appeal potential.

Do you have one of those friends who love Celtic Frost, GWAR and grindcore in general? Well then they will love the Rialto tees. Think skulls, blood, battle axes, you know the usual. I lost the link to these guys so good luck with the Google.
art clothing design fashion san francisco Thread