What the pundits are missing about the Apple iPad 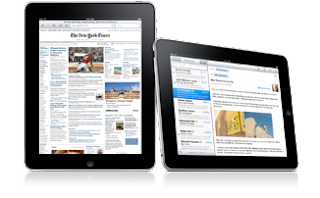 I must admit that Apple did not do the best job presenting the iPad, Steve should have skipped the initial feature overview, all this accomplished was sucking the air out of whatever momentum or surprise he may have had. The presentation format was a critical mistake as it took the wow factor completely out of how and why this great device was created, all of which would have been discovered during the detailed couch demo. That being said I'm noticing quite a bit of negative sentiment among the online masses and tech influencers.

This post was really prompted by what I see as the critical question my friend @jseleven asked, he mentioned he has a laptop and an iPhone and wondered who this device was for?

The short answer (but HUGE fact not to be missed) is that the Amazon Kindle was the MOST sold item on Amazon during the Christmas season. This fact can and should not be missed, ok now imagine a Kindle next to an iPad and there is the answer, EREADER. The ereader market is a GROWTH market and until this announcement there really was no other game but Amazon, so lets be clear although yesterday was a day of other great features it really should be boiled down to Apple putting the crosshairs dead on Amazon's forehead.

Couple other notes, in terms of the OS just being the same as the iPhone, isn't Google attempting a similar thing with Chrome on netbooks? Yes they are. As for the Flash support concerns, you should really see what HTML5 is capable of, I think the days of Flash video playback are numbered.

But again don't be distracted by what is happening here, at it's core this is an ereader growth market move and a very smart one by Apple.
amazon apple editorial ipad kindle