By SocialGreg - May 03, 2020
JOIN THE CALIFORNIA FILM INSTITUTE AND VARIETY TOMORROW FOR DOCTALK FROM HOME 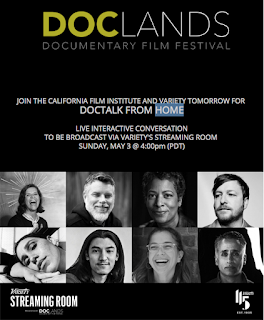 Today, May 3 at 4:00 PM PDT // 7:00PM EDT, the Variety Streaming Room, Variety’s new initiative for virtual conversations and events, will host a selection of filmmakers, from the recently postponed DocLands Documentary Film Festival (DocLands), in conversation with Variety’s Sr. Features Writer, Andrew Barker. Conversations will showcase trailers or clips from each film followed by a live, interactive Q&A with the eight directors. During the extraordinary circumstances we’re currently experiencing, we hope this 90-minute event will help showcase films that haven’t yet had public screenings or exposure beyond Sundance this year, and will prompt engaging conversations, as well as an exciting exchange of ideas between the filmmakers, moderator Barker, and the streaming audience. 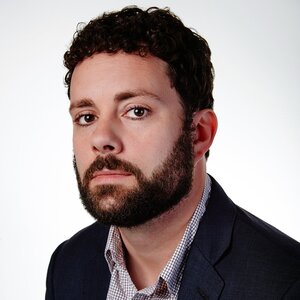 Andrew Barker is a senior features writer for Variety, where he has been on staff since 2010. In addition to writing and editing for Variety’s Focus features department, he also reviews film and music. He is a member of the Los Angeles Film Critics Assn., and recently published his first book, “Bizarre Ride II the Pharcyde,” for Bloomsbury Publishing’s 33 1/3 series.


Garrett BradleyTIME
Garrett Bradley works across narrative, documentary, and experimental modes of filmmaking to address themes such as race, class, familial relationships, social justice, southern culture, and the history of film in the United States. Her collaborative and research-based approach to filmmaking is often inspired by the real-life stories of her subjects. For Bradley, this research takes multiple forms—deep dives into historical archives, in-depth dialogues prompted by Craigslist want-ads, or an extended engagement with the communities and individuals she seeks to represent—and results in works that combine both scripted and improvisatory scenes. Bradley’s films explore the space between fact and fiction, embracing modes of working and of representing history that blur the boundaries between traditional notions of narrative and documentary cinema. Her rigorous explorations of the social, economic, and racial politics of everyday life—its joys, pleasures, and pains—are lyrically and intimately rendered on screen.


Yael Bridge is an Emmy-nominated documentary filmmaker based in Oakland. Most recently produced Saving Capitalism with Robert Reich, nominated for an Emmy Award in Business and Economics. Previously she produced Left on Purpose, winner of the Audience Award at DOC NYC. As Director of Productions at Inequality Media, Yael has made numerous viral videos tackling complex political issues that have garnered over 200 million views on social media.

Kirsten Johnson is a cinematographer and director interested in addressing the changing dimensions and urgent ethical challenges of documentary camerawork. Her film, Cameraperson, premiered at Sundance in 2016, was shortlisted for an Academy Award, won the National Board of Review “Freedom of Expression” prize, and was awarded three 2017 Cinema Eye Honors, including Outstanding Nonfiction Feature. Her short, The Above, premiered at the 2015 New York Film Festival and was nominated for the International Documentary Association Best Short Award. Johnson’s notable camerawork can be seen in Citizenfour, The Invisible War, Pray the Devil Back to Hell, Fahrenheit 9/11, Ladies First, The Oath, and Deadline.

Jeff Orlowski is the director, producer, and cinematographer of the award-winning films Chasing Coral and Chasing Ice. Chasing Coral received the US Documentary Audience Award at Sundance in 2017. Chasing Ice received the Documentary Cinematography award at Sundance in 2012 and was nominated for an Academy Award for Best Original Song. Both films were shortlisted for an Academy Award for Best Documentary, screened at Congress and the United Nations, and have garnered awards and accolades from film festivals around the globe. Jeff founded Exposure Labs, a production company dedicated to impact through film. His latest film, The Social Dilemma , will be premiering at Sundance Film Festival 2020.


Dawn Porter is an award-winning documentary filmmaker whose work has appeared on national and global platforms including HBO, PBS, Discovery and Netflix. Her current projects include the documentary Vernon Jordan: Make It Plain which explores Vernon Jordan’s rise from the segregated South to become one of the most influential African American thought leaders in America; John Lewis: Good Trouble for CNN Films, which explores Congressman John Lewis’ pivotal role in the Civil Rights movement as well as his current political and social activism on important issues including voting rights, immigration laws, and much more; and an untitled documentary project about photojournalist Pete Souza, who served as Chief Official White House photographer for President Barack Obama and as an Official White House photographer for Ronald Reagan. Dawn is also currently directing and executive producing an Apple TV multi-part documentary series with Oprah Winfrey and Prince Harry that focuses on mental illness and wellbeing.


Sanjay Rawal spent 15 years working on human rights campaigns globally. He also ran initiatives for acclaimed artists and philanthropists, one of whom encouraged him to start making films. Sanjay’s first documentary, FOOD CHAINS (2014), was produced by Eva Longoria and Eric Schlosser with narration by Forest Whitaker. The film won numerous awards, was released theatrically in 40 cities by Screen Media and was acquired by Netflix. Sanjay’s second effort took a sharp turn into non-traditional filmmaking. Applying narrative cinematic technique, Sanjay directed a sweeping expedition film. 3100: RUN AND BECOME was released theatrically in the US in 20 markets last fall. It is now opening theatrically internationally. His third effort GATHER, a documentary on Native American food sovereignty is set for completion in 2020.
Sanjay’s work has been supported by Ford, Bertha, BritDoc, Fledgling, 11th Hour Project, NoVo, and the Omidyar Network. His work has won an assortment of honors include a James Beard Media Award.
California Film Institute DOC LANDS documentary