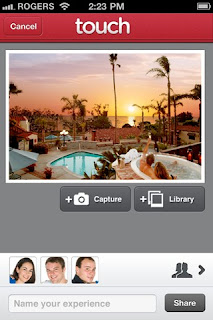 A few of us here at Nerd Stalker have been testing the pre-release version of the just released mobile app "Touch" (note the released version will differ from what we were provided). Touch is the latest product to come out of the Waterloo, Ontario based company Enflick, creators of TextNow and PingChat!

Whats particularly impressive about the Touch release is that Enflick is going the painful route of natively supporting iOS devices (OS version 3.0+), Android (1.5–2.3) and Blackberry (5.0+) on day one!

Touch allows you to create groups or private chats of all sizes as needed, you can share text, images and emoticons for free (think what Baluga should have been). 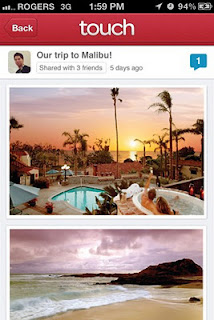 Install and setup on the iPhone and Android was a breeze (note we did not test Blackberry) our only comment on signup was that (on the Android version) when registering for the first time the password you choose is not obfuscated as you type until after you submit the sign up.

Adding friends was simple with the search, Facebook, address book, and email options. Accepting requests was also straightforward and prompted in the app. The UI is quite clean and simple for the most part, starting a chat is a no brainer. There is an option to "Help your friends find you by confirming your phone number" which works fine if you have a typical account unfortunately for your Google Voice users this could pose a problem. Each time I tried to confirm my GV number it would text my actual cell number. The issue with this is that most GV users opt out of the text plan on their given carriers since it's free on GV, thus each confirmation text will could potentially cost you. The current workaround to this is to simply not verify your number. 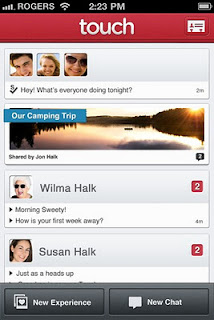 The one feature you may have some question with is what Touch refers to as the "Experience". The Experience feature boils down to uploading an image and selecting who you want to share it with. The uploading of images and chat response time is crazy fast (depending on your network), in fact when someone is writing back to you (much like iChat) there is an indicator that the person is typing back to you as they respond, I hope this remains the case when the volume of users increase. The one ui quirk we ran into on the Android during using the Experience feature was when commenting on an image the image disappeared both as we were commenting and after submitting the comment so we actually had to hit the back option in order to see the image again. 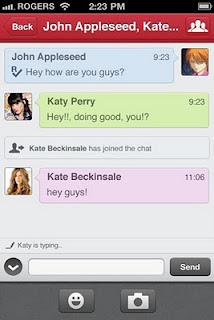 We had mixed feeling about the chat indicator that displays a message you sent as received or sent. The received message will display the message prepended by an "R" over a checkmark and the sent is the same but in place of the "R" you see an "S". One of our reviewers found it visually cluttered where I found it quite helpful to get that confirmation in the event I send a message and can see it was never received. Battery performance on the iPhone was normal but on my DroidX version there was a noticeable drain I would get the occasional gps usage flash but cannot confirm if this is a coincidence of the beta install or not.

As far as my future pie in the sky non confirmed predictions for the app I would guess there may be a desktop interface, tablet app/option, and given that this is being referred to as a "platform" an api could be a possibility as well. The only challenge for Touch is user adoption, although they are "upgrading" a huge preexisting PingChat! user base its another app you have to convince your friends and families to install.

I really like this app it's incredibly responsive, has a nice clean ui and I appreciate the no frills features, I recommend you give it a go today.

Unow22 said…
Drinking 1 gallon of water every day (just under 4 liters) is sufficient to purge the marijuana from your body over a few weeks. Other fluids like cranberry juice are also effective. Cranberry juice is rich in vitamins, creatine, and salt, which cleanse your kidneys. Many foods are rich in vitamins and antioxidants that aid your body’s natural ability to cleanse and detoxify itself.02.53-AM-e1624028870629. Visit: https://www.urineworld.com/
11:16 AM