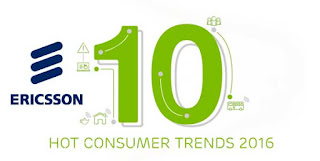 The view of half of all smartphone users surveyed by Ericsson(ERIC) as part of its '10 Hot Consumer trends for 2016' report says Smartphones will disappear in five (5) years time. Ericsson surveyed 6,600 smartphone users aged 15-69 in 13 major cities around the world. We provided all the videos in one place below. Check it out.

Four out of five people now experience an effect where the benefits gained from online services increases as more people use them. Globally, one in three consumers already participates in various forms of the sharing economy.

Artificial intelligence will enable interaction with objects without the need for a smartphone screen. One in two smartphone users think smartphones will be a thing of the past within the next five years.

Consumers want virtual technology for everyday activities such as watching sports and making video calls. Forty-four percent even want to print their own food.

Fifty-five percent of smartphone owners believe bricks used to build homes could include sensors that monitor mold, leakage and electricity issues within the next five years. As a result, the concept of smart homes may need to be rethought from the ground up. A recent article form Digital Trends summed it up by saying "there needs to be a shift away from the gadget-orientated connected home, to a smarter, more thoughtful way of living."

Commuters want to use their time meaningfully and not feel like passive objects in transit. Eighty-six percent would use personalized commuting services if they were available. Still many would like better WI-FI access. One connectivity solution could be the one touted by companies like Cisco provided on-board WI-FI and real-time integration with transit scheduling.

Social networks may become the preferred way to contact emergency services. Six out of 10 consumers are also interested in a disaster information app. There are some great free disaster apps available.

Most smartphone users believe hacking and viruses will continue to be an issue. This year, even the secure Apple iOS had virus issues. As a positive side-effect, one in five say they have greater trust in an organization that was hacked but then solved the problem.

Consumers share more information than ever and believe it increases their influence on society whether it is through blogs, reviews or social network commentary . More than a third(>33%) believe blowing the whistle on a corrupt company online has greater impact than going to the police.