Locked Out of Your Office, House or Car? - There is a Cloud App for That

Anyone that has ever been locked out of their office, house, car, or apartment knows that calling a locksmith is costly and time consuming. Besides the seemingly endless waiting for the locksmith to arrive, it can easily cost hundreds of dollars to get a lock opened, fixed and/or replaced. According to HomeAdvisor, the average locksmith visit is over $150 but can easily top $250 depending on your location and needs. Now there is a new, high-tech way to avoid the cost and get your locks opened for a fraction of the price – KeyMe.
The KeyMe kiosks allow users to instantly make copies of their keys and enables consumers to securely store digital copies of their keys so that if they ever get locked out or lose their keys, they can make a spare key at the kiosk, saving the visit by an emergency locksmith. Customers can use KeyMe’s free iOS and Android apps to save their keys in the cloud, creating a seamless multi-platform experience.   Key storage is completely free and users can save and store as many keys as they like.

Once a key is successfully scanned and stored, users can easily share they key with family or friends via SMS or email using the kiosk or mobile app. Customers simply access the key they wish to share on their “digital keychain” and tap the “share” button. 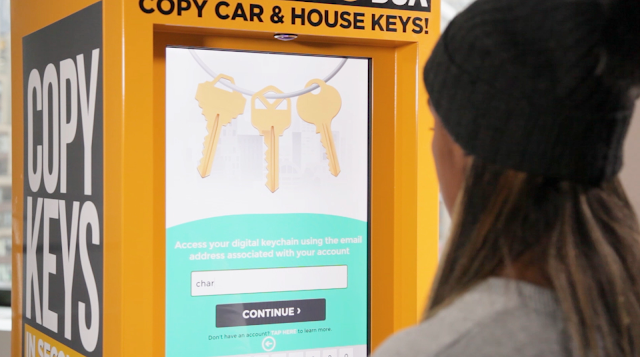 They will be prompted to submit the recipient’s email address or telephone number and KeyMe will send an email confirmation upon sharing a key and another email when the recipient has accepted the key.

KeyMe is the rapidly growing company that is revolutionizing the $7.5 billion locksmith industry and has announced a new, aggressive round of national expansion that will see the company’s key copy kiosks added to more than 50 locations per week, with plans to have over 2,000 in leading retailers by the end of 2017.  KeyMe kiosks can be found in retailers across the U.S., including: 7-Eleven, Albertsons, Bed, Bath & Beyond, Kmart/Sears and Rite Aid.

blogs said…
Today, I was just browsing along and came upon your blog. Just wanted to say good blog and this article helped me a lot, due to which I have found exactly I was looking. Folder Locker PC - Don't Suspend Around Searching, Go through About Cellular Desktops Right here folder password protect free download full version

Walmart Key Maker said…
While the keyme and other such copy services work fine for the smaller keys (usually home door keys) it simply won't work good on other more complex keys that needs locksmiths work. There are many pros and cons of using such key copy services.
6:38 PM

Isabella said…
We help installing security alarm systems and CCTV cameras for surveillance, and help protecting the precious assets at homes, shops, hotels, warehouses, and offices. Those interested to know more about us may visit our service pages and read details.
10:53 PM

jhon said…
Paired with some crusty French bread and a glass of dry French rosé, and you'll have a French bistro meal on your table in no time Warehouse Security

Kevin Dellinger said…
Hmm, it appears like your site ate my first comment (it was extremely long) so I guess I'll just sum it up what I wrote and say, I'm thoroughly enjoying your blog. I too am an aspiring blog writer, but I'm still new to everything. Do you have any points for inexperienced blog writers? I'd definitely appreciate it. See page: Top Encryption Software Choices & 3 Steps To How To Encrypt A Password For Free 3 Times Better Than Before
3:55 AM

Joseph said…
If you have the time and you don’t have an emergency locksmith service like getting locked out of your home or car, then you could ask your friends and family for recommendations.
12:30 PM

Sally said…
Now-a-days, it has become a trend to install security door locks and CCTV cameras, as it helps ensuring total safety of the home and belongings.
6:08 AM

alertlock said…
I must thank you for posting this blog because the topic is very much in demand today and everyone wants to read about it. as we provide san antonio locksmith san antonio tx at affordable prices. for more info visit our website.
10:59 PM

mtom said…
Hi, i read your blog occasionally and i own a similar one and i was just curious if you get a lot of spam comments? If so how do you prevent it, any plugin or anything you can suggest? I get so much lately it’s driving me insane so any assistance is very much appreciated. Berita Maluku

indomakmur said…
Good job on this article! I really like how you presented your facts and how you made it interesting and easy to understand. Thank you. London Locksmith

Laura Bush said…
I would say this is one of the best article I’ve read.. From beginning to end you nailed it totally. we provide Locksmith Plymouth MA at affordable prices. for more info visit our website.
12:06 AM

hajikhatri said…
Great post! I am actually getting ready to across this information, is very helpful my friend. Also great blog here with all of the valuable information you have. Keep up the good work you are doing here. Locksmith Phoenix
9:22 AM

UNKNOWN said…
That is really nice to hear. thank you for the update and good luck. Locksmith Seattle
12:54 PM

imlanguages said…
It’s a great pleasure reading your post. It’s useful information. Your article isn’t only useful but it is additionally really informative. Thank you because you have been willing to share information with us. mobile locksmith san antonio.
10:46 PM

Muhammad Rizwan said…
I lost my keys and looking for a key fob copying service in Toronto. That app is not working for me.
1:56 PM

Olivia Ava said…
I used this machine to duplicate my fob and it was the quickest solution. What is the price of this machine if I want to buy it? Is Minutefob a good brand for fob copy toronto services?
10:13 AM

albina N muro said…
The control of a locksmith isn't, presently restricted to simply picking locks or reproducing keys. Today, able locksmiths offer a game plan of associations, which are regularly available through master affiliations. These associations are not changed through their particular use, yet their applications besides go across various undertakings. From home and vehicle insurance up to mechanical security, there is a differentiating locksmith association that will be of phenomenal assistance to any person. Coming up next are a touch of the standard sorts of locksmith association that are being offered today Omaha locksmith.
11:54 PM

Eliza said…
Nice post, keep up with this interesting work. It really is good to know that this topic is being covered also on this web site so cheers for taking time to discuss this! car engine parts list
4:55 AM

Babas Judi said…
Last month, when i visited your blog i got an error on the mysql server of yours.:”:~` locksmith lenexa

Babas Judi said…
you could just listen to the beat of those high bass from Rap songs, i just like rap songs;; south austin locksmith

mikethomson said…
Great things you’ve always shared with us. Just keep writing this kind of posts.The time which was wasted in traveling for tuition now it can be used for studies.Thanks Orpington locksmiths

Geron20425 said…
We didn't begin yesterday... With more than 30 years of involvement, we understand what you need! We give insight, in Painting, yet in addition in development, politeness, regard, and demonstrable skill. That is the reason we are the Top House Painter in Round Rock, Georgetown, and the entire Austin TX Area! house painting round rock

Astrid said…
Great Information. I like the way you explain the article. Thank you for sharing this information. https://www.hvacmanassasva.com/
6:52 AM

Unknown said…
Korean drama list Great info! I recently came across your blog and have been reading along. I thought I would leave my first comment. I don’t know what to say except that I have.

mikethomson said…
Hey what a brilliant post I have come across and believe me I have been searching out for this similar kind of post for past a week and hardly came across this. Thank you very much and will look for more postings from you. locksmith