Back to the Future Day is Here 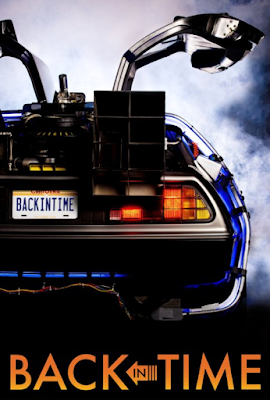 When doc set the time machine it was 10.21.2015. A new documentary film, 'Back in Time' is, at its heart, a look at the very real impact the 'Back to the Future' (BTTF) movies have had on our culture. In ‘Back in Time,’ cast, crew, and fans explore the classic time-travel trilogy's resonance throughout pop culture. As the project evolved it took them from the joyous nostalgia at a massive London fan event to the living rooms of Michael J. Fox, Robert Zemeckis, Steven Spielberg, Bob Gale, Lea Thompson and Christopher Lloyd as well as Huey Lewis, James Tolkan (“Mr. Strickland”) Claudia Wells (“Jennifer Parker”) and more.

They explore everything from Eric Stoltz’s casting to the invention of the hoverboard. Travelling throughout the world and leaving no stone unturned brings unparalleled behind-the-scenes access to the “BTTF” lexicon.

The Definitive Chronicle of the Iconic “Back to the Future” Trilogy Hits VOD and Select Theaters on 10/21 but it is already available to pre-order on iTunes: http://bit.ly/BackinTimeDoc

For further information, you can also visit http://backintimefilm.com/ and check out the clips below.

'Back In Time' Clips Galore

What REALLY happened to the original Marty McFly, Eric Stoltz?

Did you know the Delorean was almost a refrigerator?

Meet an amazing couple who not only built their own Delorean but use it to raise funds for the Michael J. Fox Foundation

88MPH Film & Music Tour Promo From Uiversal Studios
This is it.. the announcement we've been waiting for all our lives! Back in Time is going on tour coast to coast across the United States in less than one month. Watch the video to learn how you can experience Back to the Future in an all new incredible way!See Back in Time, A live concert from The Flux Capacitors, Q&A with the filmmakers, meet BTTF original cast members, and see a Delorean Time Machine, all in one place at the same time!!! Tickets are on sale RIGHT NOW.

Back in Time Back to the Future documentary

Jason Statham said…
I used to be analyzing your article and puzzled if you had taken into consideration developing an ebook in this challenge. Your writing would sell it fast. You have quite a few writing skills. Segway MiniPro

Anonymous said…
I came to your website for the first time. You are an incredible job. I am very inspired by your website and article. I find a website in which many types of chat rooms in Pakistani peoples benefits. I am visiting this website. I am very happy and enjoy this website. You must be joined. I am sure you loved it. free pakistani chat rooms
1:29 AM