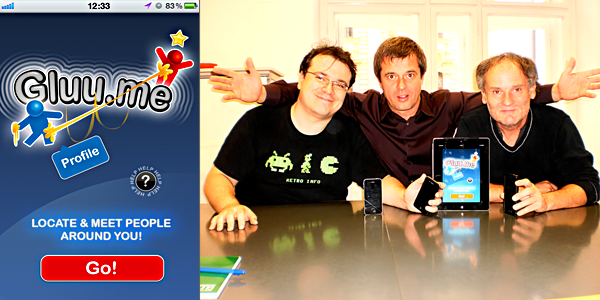 We interview founders, Alceo Marti and Miro Leko from a startup from Croatia called Gluu.me. Did you say Croatia? Yes, Croatia. Like most entrepreneurs, Alceo and Miro are just trying to solve a problem. According to a survey conducted by Concept Metrics in May of this year, people belong to an average of 1.8 social networks.  Gluu.me takes the "Fifedom" nature of the big social networks and tries to fuse them together to get a more richer experience for the social network users. Alceo and Miro also discuss the Croatian infrastructure that supports startups like theirs.

"There is a niche within the smartphone possibilities that were not well used ( that motivated us to create this app)...Fusion of all communications in one application"


Through the power of GPS, Gluu.me allows you to track your friends and a group of friends.  Groups can be company, project team or family members. This feature could be interesting for a lot of people who want to see if anyone in their "crib" is around. Gluu.me allows you to see strangers who are not in your group but in the Gluu.me network. Gluu.me protect your privacy by doing an equivalent of knocking on the door and it will be up to the user to let people in or just hiding your location. Miro and Alceo also talk about their business model that expects to use the power of the mapping to embed advertising (local businesses) on the map itself.

I downloaded the app from the play store. It has some cute sounds to start but I can see that getting on someone's nerves after a while. The map naming was a little inaccurate for my local area but the location was fine(probably Google).  I can see the group feature being one of my favorites. Possibly creating one for close friends or business associates can be useful to me. I can track people as they approach my destination for a restaurant or a meetup. Finding new friends in person can be interesting, but it will have to be in a place where there are a lot of users. If you like remote friends, this can work too.

I am always amazed how companies come together and how founders come together. Alceo is a film-maker and Miro is a lawyer and they set out to solve a problem. I would say a different but common "Odd-couple" partnership in this start-up age.  An Croatian angel investment group powers their startup and it looks like the weather above them is not "gloomy" for the near future.

Also available on Android on the Play Store.

Anonymous said…
Very interested project. I tried it myself and group feature is my favorite too.
1:50 AM