Lower Your Stress of Food Phone Ordering the Eat24 Way 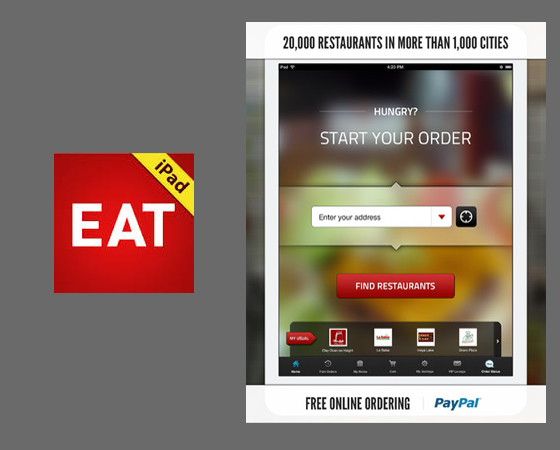 You get home after a long day, get the tablet out and plunk down on the couch. You realize you need to eat. No motivation to cook so you search some restaurants on Yelp trying to figure out what to order, where to order and how to order. Enter Eat24. Eat24 has been famous for food delivery from your couch through the web. Now you can do it via the iPad - Eat24 App. Our Greg Viloria aka SocialGreg talks with the Eat24 team on the newly released iPad and some insights into their San Bruno, CA based company.


Food Phone Ordering Can Be Stressful

"...orders from our mobile, smart device apps make up the majority of our orders"

"(customer's say 'Talking on the phone is scary'...especially the mom and pop shops that may not understand english as much"

"all the information that you can possibly need at your fingertips...Yelp reviews embedded in the app...Eat24 Notes...kinda like Yelp reviews but is dish specific so you can remind yourself ...'the Tikka Marsala was good but get it spicy instead of medium next time'"

I thought it was interesting to say the least that the Eat24 customer's take on phone ordering that it was "scary" or "stressful." I think the stress is more like time consuming. That being said, Eat24's value proposition is that their Customer Support and Apps are the experience. They are a relatively big company-150 strong and I think it shows. The UI is clean and the experience is nice. Since starting in 2008, their adoption is very strong and have  a presence in 1000 cities. A lot of the 150 are online customer service people or your "chat" line service  people which are there to serve you 24 hours per day. The iPad app was just released last month and still gaining traction. Probably time to do an article on the best food apps. What are your best food apps?
Eat24 food Food Apps ipad