Mission Techies Give Unanimous Thumbs Up to Facebook Campus Visit

Mission Techie Yaritza opened her weary eyes this morning upon awakening in her Mission District home, the 17-year-old Lowell High senior not sure what her day would bring. She and 18 other Mission Techies, from MEDA’s third cohort of its free young adult program, had been graciously invited to tour the campus of tech giant Facebook. The group MEDA has been guiding on the path to an IT career now had that path extended to the tech hub of Silicon Valley.

While it is a mere thirty-mile bus ride from the underserved communities of San Francisco’s southeastern quadrant to the leafy, suburban streets of Menlo Park, Yaritza was aware that a new place awaited. It was time to come face-to-face with that world—a world of high tech, as a group used to getting inside a computer was now being taken inside one of the most powerful companies in the world.

“It was like spending a short vacation in a mini-Hollywood.”–Mission Techie Jamar Walker

As the bus approached 1 Hacker Way and its famed “Like” sign, palpable excitement was in the air. MEDA Technology Training Coordinator Leo Sosa advised the group, “You’re being afforded an amazing, rare opportunity today. Listen carefully to what you hear. Learn.” 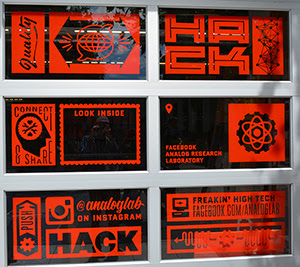 There is plenty to learn from a company that has connected 1.29 billion folks (and counting) worldwide in novel ways. For example, when Iceland decided to rewrite its constitution in 2011, the island nation used Facebook as its platform to garner feedback. According to Gizmodo, every day “Facebook deals with 2.7 billion likes, 300 million photos uploaded and 500 terabytes of data.” These numbers are hard to comprehend for anyone, let alone a cadre of 17- to 24-year-olds from San Francisco’s low-income communities.

The Facebook campus was designed to look and operate like a town within a town–replete with health center, bank, barber, dry cleaner and more. To make that grandiose vision a reality, the tech giant hired a duo of Disney consultants. They succeeded, as this is not your usual suburban office campus of pale-gray, blocky buildings enveloped by a stretch of greenery. Here, an aerial pedestrian crosswalk, painted to emulate the International Orange of the iconic Golden Gate Bridge, connects two buildings over a busy street. There is a main plaza, with a massive outdoor screen that rivals Times Square and seemingly random gray stripes that actually spell “HACK” when viewed from an airplane. A yellow crane marks the traditional gathering place for hackathons. 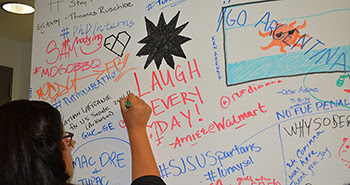 A group tour of this dynamic campus, where employees are invited to scribble their thoughts on walls and can power nap in an oversized beanbag chair, takes a special invite. Leah Cerri, MEDA Volunteer Services Manager, helped set up the day. “It is exciting to see MEDA strengthen our relationship with Facebook to assist youth,” thankfully stated Cerri.

“Overall it was a breathtaking experience and I’m grateful I got the chance to see how Facebook works and possible networking options.”— Mission Techie Robert Edwards 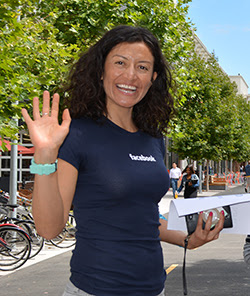 Jackie Garrido, who does onboarding for Facebook, serving as a welcome wagon for new hires, was on hand to greet the Mission Techies. No stranger to MEDA, Garrido has sat on the “Latino Career Panel” at two “Get Connected!” events held at Plaza Adelante. Her parents are of Guatemalan descent and she even recently lived in Central America for a couple of years.

Facebook’s Kurtis Nusbaum, a Mission denizen until a recent move a few miles away, has been volunteering to teach the Mission Techies Python coding, so he offered to lead the campus tour. Nusbaum has enlisted friends from the tech world to assist in teaching these night classes. Nusbaum’s enthusiasm for Facebook, and his work, was obvious. His face lit up as he showed the young adults innovative workspaces, a 25-foot-long monitor that when touched highlights user demographics, a massive cafeteria where you can get free meals throughout the day, an arcade to work off steam and so much more. 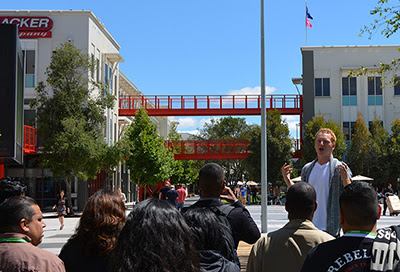 It was hard to take it all in. Nusbaum (photo, speaking to the group), still seemingly in awe of his work environment, mouthed the word “awesome” on more than one occasion.

MEDA Technology Manager Richard Abisla, who made the concerted effort with Cerri to make this invitation possible, summed up the day as follows: “We’re really grateful to the employees of Facebook for their good-faith effort to bring our students into the conversation. This is creating a defined path to access employment at tech companies, which is where the economic growth of the Bay Area is now.”

The conversation was powerful once the group met with a panel of five Facebook employees who told how they wound up in the tech world. This was followed by a half-hour Q&A session. One panelist, Denise Hernandez, offered the Mission Techies the sage advice, “The only obstacle to your success is you.” Several Mission Techies were even given the personal emails of panelists, with agreement to stay in touch.

“I like the advice that I heard from the panel today and I definitely appreciate their time and stories.”—Mission Techie Jugena Norrise

On the bus ride back to MEDA’s Plaza Adelante neighborhood center in San Francisco, Yaritza endeavored to take in the day’s events—a day that had transformed her life’s path. She stated, “This was more than I expected. I wasn’t sure what I would study in college. Coming to Facebook was really cool. You can change people’s lives. The Mission Techies program I am in this summer and this trip to Facebook today have made me decide that in college I am definitely going to study subjects that will lead to a job in the tech field.”

Like the rest of the Mission Techies, Yaritza’s eyes were opened a bit wider than when she awoke this morning. There was one thing she needed to immediately do: post the pictures of her amazing day on her Facebook page. 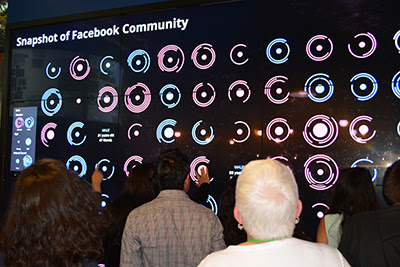