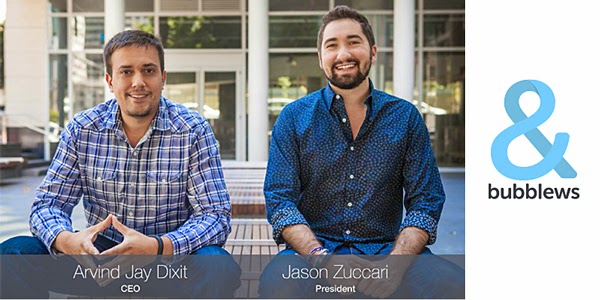 Who get's paid for their post engagement on Google+, Facebook or Twitter? Nobody. Arvind Dixit and Jason Zuccari of Bubblews is hoping to change that. This service isn't new but it sits as a growing lilliputian in the land of the social giants.  In fact, it has been around since 2012 but with an injection of some needed funds and a home in San Francisco, this service may have a chance. Bubblews is a service that pays for the equivalent of likes and shares. Listen or watch what Jason and Arvind has in mind to change the social world.

"It is a social content site...write a 400 word minimum...people are compensated based on their social interactions - their likes, views or their comments. A penny per post."

This is an interesting model where they are sharing their advertising dollars with their user base. With about 1M views per day their pay per "like" model looks pretty good. This model requires the company to run lean which leads them to create their own Ad network to minimize the operational costs. Growing a social network user base is tough these days with all the choices and especially with data out there saying we usually will not have more than 30 Apps that we use at any time and a worldwide social network average of 3.1. But don't count out these guys, they moved from the east coast to SF last year, they secured a round in February and has a staff of 10 people. Not too shabby. Check out more at www.bubblews.com
Arvind Dixit bubblews Jason Zuccari Social Network

Anonymous said…
Too bad they are hardly paying people anymore. They went from payments in 3 days to payments in 30+ days and many, many, of their (well standing) members are not being paid. That on top of all the website errors and glitches that are still around even after this supposed great update.
I don't think they should go around tooting their own horns until they fix whats broken.
They are bound to have a lawsuit on their hands soon if they don't start paying their members.
3:09 PM

Anonymous Acres said…
They pay people... Trust me.... I have never not been paid. Also got an email back 2 hours after I asked about my last redemption.
3:18 PM

Anonymous said…
I totally agree with Anonymous, they should pay their old members who doesn't broke the rules in lest than 30 days. I have been a member for over a years and I am still waiting to be paid for my last redemption 40 days ago.

Anonymous said…
I have been paid for over 20 times, but lately it is taking longer and longer to be paid, that is unacceptable. Instead of promoting the website, they should have a proper payment department and answer email from long lasting member and pay them in time. Why a newbie who broke the rules is paid in 10 days and a member for the past 10 months who respect the rules still wait to be paid after 38 days
3:27 PM

Sakeenah said…
I've been on Bubblews for over a year and don't have issues getting paid. I think they are doing a great job given all they have to deal with.
3:42 PM

Anonymous said…
I used to be paid regularly, now I'm missing 2 payments since this "new change" has taken place. They are too worried about the media and getting known than they are about communication with their members. They don't respond to people and the amount of spam and plagiarists on their site is ridiculous. They are paying people who can't write, plagiarism and spam like crazy but they don't bother with the real members of their so called friendly community. They have so many issues it isn't funny. Yeah, you might get paid, but there's also a chance you wont. You can certainly give it a shot, but don't say you weren't warned!
4:21 PM

Anonymous said…
i've posted lots of articles in the site bubblews but when somebody reported me, they automatically deleted my account without informing me of any violations.. that is how they work?and then they show on presses releases the kind words showing people about their site..but if you stay longer and longer, you will see how the system really works..the more veteran you are in the site.the more you see their flaws.

Lately,many have been complaining about deleted accounts without prior notice to the user.
Many have complained about the redemptions not being paid and the users thought of cherry picking in their redemptions since only few are being paid.

I've seen one that said that he has 12 pending redemptions and then his account got deleted. Until now, he didn't receive any payment from bubblews. Imagine each of those 12 redemptions amounting to $70. Is that their strategy? and then saying that the user violated the rules? which in fact that user had just 10,000 followers.

If you have the passion to write, bubblews is the right site for you. But be sure to look into what is really happening in their system before you waste your time.
6:14 PM

Anonymous said…
Even if you follow the terms of service you have to wait for a long long time before you see a dime when you are a real member for more than a years, and those newbies who brake the rules gets paid within 15 days...that is a joke!
6:38 PM

Anonymous said…
If you have the passion to write, stay away from Bubblews if you want to be paid...I am a veteran of Bubblews and I am leaving Bubblews. They haven't paid me over $350, I am returning to squidoo...at least with them they pay!
6:43 PM

John Dyhouse said…
It would be nice if you could trust Bubblews to pay Too many times it seems to be a random chance as to whether a redemption is ignored or not.
What makes me sick is those people who say, "I have always been paid". Well I am here to tell you all that I have never knowingly broken their rules and have missed several payments. I have totally given up with the site.
12:48 AM

Anonymous said…
I have been paid too. Their format allows hogwash too and they too get paid. I would rather they insist on standards.
3:33 AM

Sampath B said…
This comment has been removed by the author.
5:58 AM

Anonymous said…
Bubblews.com chance my life, thanks you guys
8:57 AM

Anonymous said…
I have been paid without problems for the past 16 months....however now payments have seem to stopped and I'm waiting on 4 of them.
11:27 AM

Anonymous said…
This site fucking scam, Don't trust them, Just wasted your time for bullshit work
I'm request 7 times.
First at 1/7/2014, up to now, i'm not receive anything
11:57 AM

Anonymous said…
Don't listen to the negative white noise. They are NOT a scam; they DO pay, they are just experiencing a few growing pains as they blow everyone else out of the water. Two steps back; ten steps forward. Ignore the naysayers!
6:23 PM

Anonymous said…
Oh, I don't know what to say about payments. I 'm waiting for one and will press the redeem again pretty soon, so I'll have 2 waiting...AND I really hope they will be on time, even if that means 30 days of waiting.... :) THEY paid every check until now and I think they will do it from now on, it's just that they need to work on the payments department and make it more functional.
2:22 AM

joe garcia said…
Most of the complainers had to have done something wrong. I have yet to see people not paid who do their due diligence. There have been so many people trying to cheat the system, spammers and plagiarizers are the worst. People think this is a blog where they can copy and paste from other sites. We do not allow this here. They do it, they don't get paid and eventually deleted. And these are not the only reasons either.
6:53 AM

Foxy said…
I have been a member since December 2013 and have received every redemption. Sure I have had a few that took longer than others but that is because of the spammers and the plagiarists that kept stealing from the company. This site is not a scam and I will stick with them no matter what anyone else says.
10:16 AM